In a previous post, we described our Top 10 ranking of conditions most frequently diagnosed at Michiana Eye Center, but how do they compare to the national averages for ocular conditions? 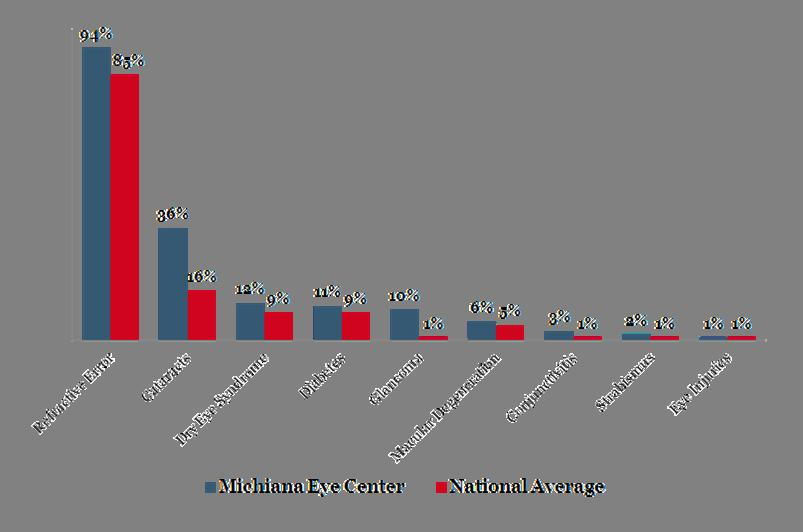 Our results were similar to numbers compiled by the Centers for Disease Control and Prevention, and the National Health Interview Survey which was created based on numbers from population-based studies.[1] In many of the age-related diagnosis studies, the age of participants started at 40 years old, which varies from our study, which utilized all patients who visited our office during 2016-2017. Although Michiana Eye Center appears to have higher diagnosis percentiles than the national average, these numbers may be representative of  both patients who are symptomatic and non-symptomatic for each condition, and belong to a broader age range. Recognizing that many patients may not want to take the time to schedule an appointment unless their eyes are bothering them, the national average naturally will appear varied in some of the diagnoses.

Unsurprisingly, refractive errors are fairly common in the United States, with about 85% of Americans having some form of visual acuity error.  Cataract patients also received a comparably high percentile, however not quite as high as expected. Approximately 20.5 million Americans ages 40 and up are reported to have cataracts, significantly less than the 36% of patients seen at Michiana Eye Center who are diagnosed with cataracts each year. Why such a significant difference? In the 2010 United States Census[2], adults aged 65 and up represented 13% of the population, while our patient mix at Michiana Eye Center represents about 27% of this same age group.