Glaucoma: the "sneak-thief of sight"

Glaucoma is characterized as a group of eye diseases which gradually steal sight without warning. Improper drainage of aqueous humor (inner-eye fluid) through the drainage angle causes pressure to build within the eye. When this pressure increases, the connection to the optic nerve becomes damaged, resulting in vision loss.

There are two common types of glaucoma: 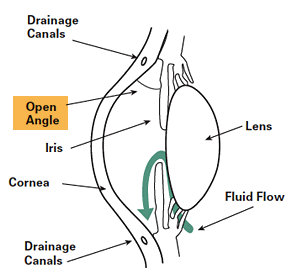 Within the eye exists a series of meshes known as the trabecular meshwork, which facilitates the drainage of the eye’s fluid, known as aqueous humor. Over time, this meshwork can become less efficient at draining aqueous humor due to clogging. As this happens, your intraocular pressure (IOP) rises, causing the retinal cells that are responsible to your vision to die, and damage to the optic nerve. Open-angle glaucoma is the most common form of glaucoma, accounting for over 90% of glaucoma cases. It is also sometimes referred to as chronic glaucoma, as it is a lifelong condition.

Typically, open-angle glaucoma has no early-indicating symptoms. Patients diagnosed with open-angle glaucoma usually do not notice vision loss until the optic nerve has been substantially damaged. As the optic nerve becomes increasingly damaged, glaucoma patients will begin to notice black spots in their field of vision that gradually become larger as more optic nerve fibers die. This gradual death of nerve fibers will result in complete blindness if left unmanaged. 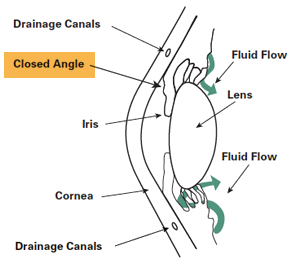 Unlike open-angle glaucoma, which occurs when the trabecular meshwork becomes clogged over time, closed-angle glaucoma occurs when an individual’s iris and cornea occur too close together, blocking the drainage canals which allow aqueous humor to flow out freely. This condition, known as an acute attack, develops very quickly as intraocular pressure rapidly increases. It is considered a true emergency requiring immediate attention.

Symptoms of a closed-angle acute attack can include:

If you begin experiencing any of these symptoms, it is considered a medical emergency, and should be treated immediately. Unfortunately, many of the people with the highest risks for developing closed-angle glaucoma exhibit little to no symptoms prior to an acute attack.

Other types of glaucoma include:

The best prevention against glaucoma is to regularly schedule a comprehensive eye exam. Even if you aren't currently experiencing any symptoms, a dilated eye exam can diagnose and treat early symptoms of glaucoma that may otherwise go unnoticed until it is too late. To schedule an appointment with us, call our Mishawaka location at (574) 271-3939, or register online.

EyeSmart Education, provided by the American Academy of Ophthalmology