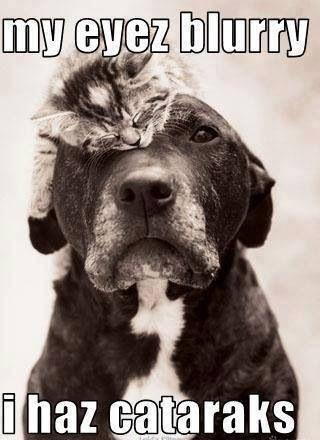 If you have a cat or a dog, perhaps you’ve experienced the clumsy situation of trying to toss your furry friend a treat, and watching as they fail miserably at retrieving it as it tosses unobserved onto the floor. Or, perhaps the opposite scenario has your pet diving into the air and masterfully catching it in the blink of an eye. Have you ever wondered why our pets have such unpredictable visual perception? Here’s a hint: it’s not because they have cat-aracts…

What’s Up with Cat Eyes?

Cat eyes, like eyes of other predators such as alligators and hippopotamus, have a very distinctive look. Their slit-like pupils allow for faster dilation and increased depth perception.[1] The most active times for cats are typically in the morning and evening, times which are represented well in the structure and function of their eyes.[2] Unlike human eyes, that have roughly 120 million cones, cats only have about one tenth that amount, making their “bright light” detection of moving objects significantly handicapped.[3] An advantage, however, lies in their concentration of rod cells which dominate the “visual streak” located centrally to their visual field. The high density of rods located within the visual streak (roughly 6 to 8 times more than the human eye), indicates the nocturnal nature of cats, giving them the ability to distinguish finer shades of grey, as well as increasing low-light sensitivity.[4] That eerie glow you see when you have your headlights on at night? That’s the result of the tapetum lucidum, a reflective layer of tissue located behind the retina.[5] The tapetum gathers and shifts wavelengths of light, causing predators and other images to appear “silhouetted” against the darkness, while evoking a glowing yellow or green reflection in the eyes of cats, opossums, deer, dogs, and other creatures of the night.[6] The last adaptive feature of cats is the nicitating membrane, which sounds much more interesting when referred to as the, “third eyelid”(which would be a great name for a SciFi novel about a race of aliens who travel to earth…but, I digress). The third eyelid basically operates as an extra shield to protect cats from foreign bodies that may fly into, scratch, or dry out their eyes. Its moisture-rich quality enables cats to focus on objects for extended amounts of time without the need to blink and re-focus. It’s too bad that humans can’t have third eyelids! We’d never need to practice the 20/20/20 exercise! 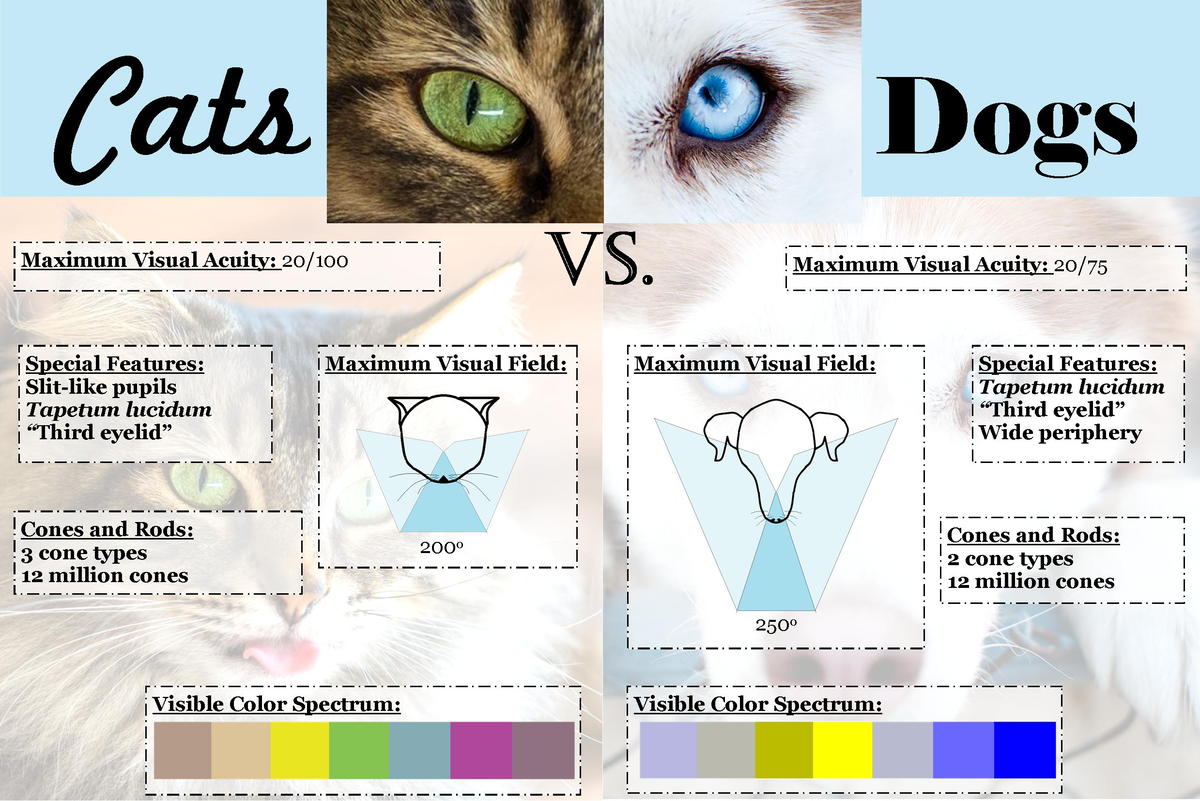 The eyes of dogs are unsurprisingly quite similar to both cats and humans. Eliminating the first obvious difference of slit-like pupils in cats, the anatomical similarities between our two favorite pets is apparent. Our canine counterparts also have tapetum lucidum as well as the “third eyelid,” nicitating membrane. These features operate the same way as in cats, and are well-suited to fit the behavior of dogs as they hyper-focus on leaping to retrieve that stick, or to chase a scavenging raccoon away from your dumpster at night.[7] Dog eyes also, like cats, contain a higher density of rods within their area centralis, the area of central vision, than humans. Humans, who have greater need for detailed vision during the day, have ten times more cones located within the fovea, the human center of vision.[8] Unique to dogs, however, is their simplicity in cone variation. Both cats and humans contain three different types of cones, which is believed to allow cats the ability to see a wider spectrum of colors than dogs.[9]  While cats may have difficulty determining certain hues outside of blues, grays, yellows and greens, a dog’s eye contains only two variances in cones, limiting their color spectrum to mainly hues of blue and yellow.[10] 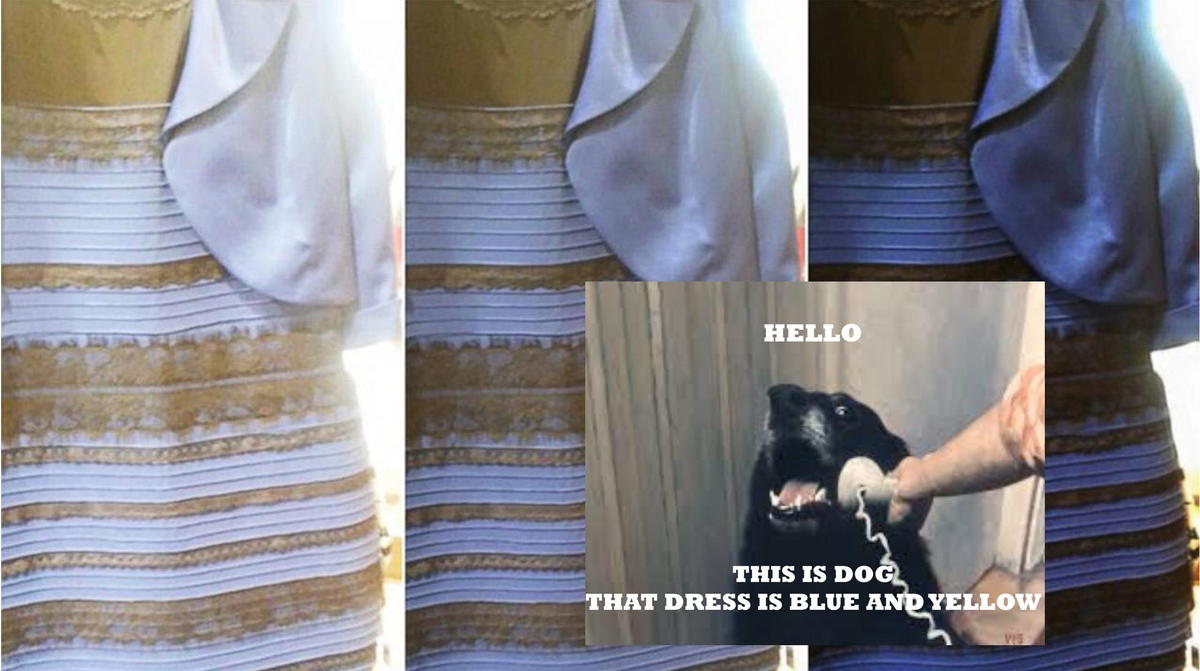 The orientation of a dogs eyes, which typically are located closer to the sides of the skull, give them the advantage of a wider degree of visual field. In cats and humans, who have similar eye placement, the degree of visual field ranges from about 180 to 200 degrees. In dogs, however, a fixed field of vision can reach 250 degrees, depending on the breed of dog.[11] Their peripheral detection of movements makes them experts at chasing lateral moving targets such as rabbits, cats, or the unsuspecting postman…

So, who has better eyesight: cats or dogs? The simple answer is of course, they both do. In the world of humans, where hierarchy is determined by competition for “best,” we are encouraged to always search for optimized versions of ourselves. For our pets, however, their “best” will always be determined by who is first to eat the treat.